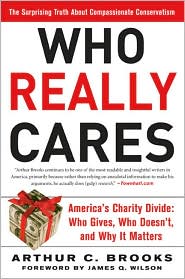 According to Arthur C. Brooks


a scholar at the

Americans are remarkably charitable. But what sorts of people give the most? And how do we compare with the Europeans?


Q. How much do Americans give? Is the amount we give going up?


A. In one recent year, Americans gave about $295 billion to charity. This was up 4.2 percent over the pervious year’s levels; and charitable giving has generally risen faster than the growth of the American economy for more than half a century. Correcting for inflation and population changes, GDP per person in America has risen over the past 50 years by about 150 percent, while charitable giving per person has risen by about 190 percent.


Q. So where do the donations go?


A. A large majority of U.S. citizens donate money each year to houses of worship and charitable organizations. Most estimates place the percentage of American households that make monetary contributions each year at 70 to 80 percent, and the average American household contributes more than $1,000 annually. But it is not the case that American giving goes entirely—or even mostly—to religious institutions. About a third of individual gifts go toward sacramental activities, primarily supporting houses of worship. The rest goes to secular activities, such as education, health, and social welfare.


Q. Are Americans more or less charitable than citizens of other countries?


A. No developed country approaches American giving. For example, in 1995 (the most recent year for which data are available), Americans gave, per capita, three and a half times as much to causes and charities as the French, seven times as much as the Germans, and 14 times as much as the Italians. Similarly, in 1998, Americans were 15 percent more likely to volunteer their time than the Dutch, 21 percent more likely than the Swiss, and 32 percent more likely than the Germans. These differences are not attributable to demographic characteristics such as education, income, age, sex, or marital status. On the contrary, if we look at two people who are identical in all these ways except that one is European and the other American, the probability is still far lower that the European will volunteer than the American.

to find a Charity you can trust.

Posted in Your Relationships and tagged Women