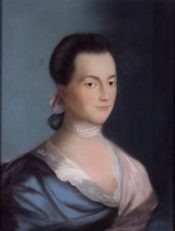 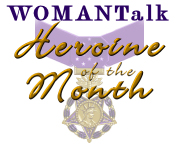 Heroine: a woman having the qualities of a hero; a woman admired and emulated for her achievements and qualities; the central female figure in an event or period.

Abigail Smith Adams was the wife of John Adams, President of the United States.

Born in Massachusetts to William Smith and Elizabeth Quincy in 1744, she was a descendant on her mother’s side of King Edward I, and King Edward III of England. Her father and his relatives were Congregational ministers and leaders in society.

Though she did not receive a formal education, her mother taught her to read and write, and her father’s library allowed her to study English and French literature. This would eventually create a bond between her and John Adams, a Harvard law graduate, and they were married in 1764.

Abigail was an intellectually open-minded woman for her day, and her ideas on women’s rights and government eventually played a role in the founding of a new nation as wife to John Adams, the second President of the United States.

She wrote many letters to her husband while he was in Philadelphia, Pennsylvania during the Continental Congresses, which are considered to be excellent sources of political commentary of those times. John Adams frequently sought her advice as their letters to one another, filled with discussions on government and politics, attest.

Known for her request that John and the Continental Congress: “…remember the ladies, and be more generous and favorable to them than your ancestors. Do not put such unlimited power into the hands of the Husbands. Remember all Men would be tyrants if they could. If particular care and attention is not paid to the Ladies,” Abigail is sometimes called the first feminist in America, even though she believed that a woman’s most important role in life was those of wife and mother.

She raised four children, including John Quincy Adams, the sixth President of the United States. She helped care for the wounded and sick during the revolutionary war, while her husband was working to forge a new country with such men as George Washington, Benjamin Franklin and Thomas Jefferson. She was anti-slavery, and passed this cause on to her son, John Quincy Adams, who would pick it up and carry with him until he died.

Part of her legacy includes the reconciliation between her husband, John Adams and Thomas Jefferson, as they lay dying in their beds in 1824. Fifty-years prior, both men had worked side-by-side to help create the United States of America, but they would spend their later lives at odds with each other. It was Abigail, a woman who lived in a time when women’s opinions were largely discounted, who began a dialogue with Jefferson that would rekindle the friendship, love and respect of these two great Founding Fathers for each other.

“Remember the Ladies, and be more generous and favorable to them than your ancestors.”

“I regret the trifling narrow contracted education of the females of my own country.”

“These are times in which a genius would wish to live. It is not in the still calm of life, or the repose of a pacific station, that great characters are formed.”